Candidates for Limestone County Sheriff, County Commissioner (Precinct 3), and County Constable (Precinct 1) took center stage Monday night at Kosse’s Community Center in hopes of winning votes in the upcoming Primary Election. The Meet the Candidates event was hosted by the Community Center Board, and about 100 citizens from Kosse and surrounding areas were in attendance to participate in a conversation about the future of the county under leadership positions up for election March 3, with early voting starting February 18.

Cake, popcorn and cool beverages were available to guests, but the conversations with county candidates and leaders was the bigger draw for a majority of the crowd. A portion of each candidate’s opening statement has been included below.

“I’ve been in public service for the last 20 years professionally; fire, EMS, and now law enforcement for the last year and a half or so. I’m currently a patrol officer with Hubbard Police Department, and one of the reasons I went to Hubbard was for experience, because if elected, I want to make sure I have both aspects of it done, criminal and civil law. I don’t claim to know everything, I don’t think anybody does. Thank you guys for allowing us this platform.”

“I’ve been the Constable, starting my 16th year. Before that I was four years as a Deputy Sheriff and seven years as a county jailer, so I’ve got 27 years of law enforcement, the last 20 has all been with the county; 30 years in public service. I’ve been your constable for 16 years, it has been an honor being your constable and it has been a privilege, and I hope I can continue to do it after this election. Allan is a fine young man I’m just not ready to retire.”

Murray Agnew “I’m currently the Chief Deputy of Limestone County Sheriff’s Office. I first came to Limestone County in 1995, working for Sheriff Dennis Walker. Prior to that I’d been at Milam County and the jail in Bell County beginning in 1991. Total I have almost 29 years of law enforcement experience. I try to be as active as I can in the community. In the 29 years of law enforcement, mostly has been here in Limestone County. I’ve been a Patrol Supervisor, Patrol Officer, an Investigator, a Captain over investigation and finally Chief Deputy. There are many aspects to the Sheriff’s office, and I do believe we’ll get into some of those a little bit later.”

Chris Henson “I am currently employed as the Chief of Police for the City of Groesbeck, I am also the City Manager. I’ve been the Chief since 2015, I’ve been the City Manager since 2016. Doing those two jobs has enabled me to learn a lot of things about city government. I’ve had good interaction with the county, the commissioners, the county judge, so there’s a lot of knowledge there. Obviously there are some things I think we should change, and as the night goes on, we’ll get into those. I’m not bashful about it. The things I will say are not personal, they are not personal to Murray Agnew, they are not personal to the Sheriff’s Office. They are things that I believe and things that I think we need to fix for this county. I’ve been in law enforcement for 23 years, I’m not as old as Murray so I haven’t been in quite as long. Majority of my time has been spent at Groesbeck Police Department and Limestone County Sheriff’s Office. My time with the Sheriff’s Office started as a dispatcher in 1995, I then became a police officer with the City of Groesbeck. I was hired by Sheriff Wilson when he took office in 2001. He hired me as an Investigator, a year and a half later he promoted me to Lieutenant. I was then over patrol and communications. Three years later, he promoted me to Capitan and I was over patrol, communications, and administration. The reason I bring that up to you is I am more than capable of running the Sheriff’s Office. Daily I ran three of their five divisions and I did it well.”

Bill David Sadler “I was born and raised in Groesbeck, I’ve lived there all my life. I am a 1991 graduate of Groesbeck High School. I graduated from Baylor University in 1995. After graduating from Baylor I had the opportunity to work for Farm Bureau here in Groesbeck, and I was an insurance agent for two years. After that I had an opportunity to go to work for First National Bank there in Groesbeck where I was employed for almost 20 years. During that time period, I obtained a real estate license and assisted my father in family business Sadler Land and Realty, which I’m currently still employed at. Most of my life, I’ve been very involved in our community and so forth. I’ve served on the Groesbeck City Council, Limestone Medical Board, and School Board. I feel like that I’ve been given the opportunity to gain the experience to have the knowledge, what it takes to be a commissioner with my background in finance and working with different organizations and boards and my education, I feel like I have a strong background as far as what it takes to serve as commissioner. If elected I’m a very honest and open-minded person and I would always be accessible to everyone in the community and represent all, not only my precinct but the whole county. The reason that I’m running is I care about our county, I care about the residents of our county and I want to make it as good as possible.”

John McCarver (incumbent)“I’m serving my fourth term as Limestone County Commissioner, I’m running for my fifth and final term. Somebody said ‘well why would you want to do that?’ being in office that long, and the reason why is because I love Limestone County. I grew up in this area, in fact I was actually born in Falls County but when I was 6 months old they got me across the line as quick as they could and I’ve been here in Limestone County ever since. Not really planning on leaving, I’ll be buried here. I do a lot of things here in the county, maybe other commissioners won’t do. I’ve been President of the Senior Citizens for 14 years. I’ve been on the Appraisal Board, Chairman, I don’t even want to be on that board but I’m on there thanks to some folks that vote me on there, that’s 10 years. I’ve done a lot of things in the community. We love this part of the country, and hope to serve one more term. I’m actually retired from the Texas Department of Criminal Justice; when I got elected, I retired from there. There’s so many things about Limestone County that I love and I want to serve it four more years so I can make some decisions that would help us go into the future.”

Robert Koch of the Kosse Police Department acted as the moderator for the event, voicing questions that had been submitted and selected by attendees and event organizers. After making opening statements, candidates responded to questions about their priorities, qualifications, and what changes they hoped to make. Each candidate spoke on their love of and commitment to this county, and shared how they would fulfill duties of their respective positions in a way that best serves the public.

After the question and answer portion of the event concluded, candidates remained at the Community Center for some time, speaking with citizens who had questions or concerns that were not addressed at large.

Candidates will be participating in another Meet the Candidates night in Groesbeck on Monday, February 17. The Convention Center Doors will open at 5 p.m. and the event will begin at 6 p.m., with Richard Nelson acting as moderator.

Early voting will be held at the Limestone County Courthouse in room G-1, located at 200 W. State St. in Groesbeck. Voters can submit ballots there between 8 a.m. and 5 p.m. Tuesday through Friday, Feb. 18-21.

Friday, February 21, will be the last day to apply for a ballot by mail (received, not postmarked).

The Mexia Civic Center, located at 101 S. McKinney Street in Mexia, will offer the same schedule as the courthouse during the aforementioned dates and times. 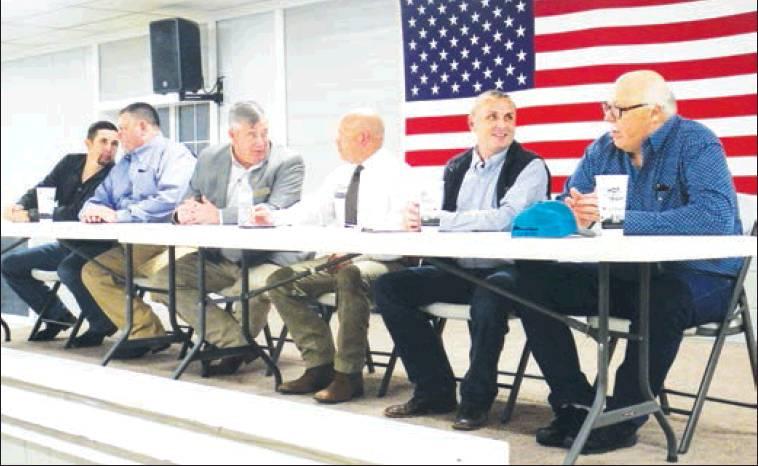 A Tribute to DPS Chad Walker