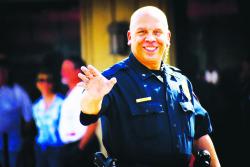 Chris Henson is running for Limestone County sheriff, with the retirement of longtime sheriff Dennis Wilson.

Henson began his law enforcement career as a dispatcher for the Limestone County Sheriff’s Office in 1995. Working full-time on the night shift, Henson attended school and police academy during the day. After graduation, he continued working as a dispatcher, also obtaining a role as reserve Deputy Sheriff in Freestone County.

He began full-time employment as a Groesbeck Police Department officer in May 1997. During his time at Groesbeck, he earned a promotion to patrol corporal in 1998 and then patrol sergeant in 1999.

“I remained in the sergeant’s position until my departure in November 2000,” Henson said via email.

Henson remained in that position until January 2015. He then assumed the current role as chief of police for the city of Groesbeck. He’s also served as city administrator, beginning in an interim capacity in 2015, fully appointed in 2016 and continuing to present day.

When asked about his priorities if elected sheriff, Henson said, “My priorities have been and always will be the citizens we serve and the staff under my command.” He highlighted the importance of increasing patrol presence in outlying and rural communities, noting the office’s role as providing law enforcement and protection there.

“I’ve spoken to countless people in areas such as East and West Lake Limestone, Farrar, Ben Hur, Tehuacana, Lake Mexia and other remote areas,” Henson said. “I will develop proper staffing, patrol patterns and engagements that will increase our presence in those areas.”

Another focus of Henson’s will be employee retention, citing pay as an important factor while also noting high turnover at the Limestone County Law Enforcement Center and patrol divisions. For the pay issue, he will present a plan to Commissioners Court.

“I will also prioritize improving the sheriff’s office relationships with other local law enforcement agencies,” he said. “I think that by bringing all the agency heads together and discussing the issues that affect all of us, we can unite, substantially increase our abilities in fighting crime and protecting our citizens.

Henson feels that the biggest issues facing the sheriff’s office are “structure and guidance.” To him, that translates to employee morale, retention and pay issues. He plans to restructure the agency with transparent guidelines to improve morale and employee retention.

“After 20 years, I believe that the sheriff’s office is due for a fresh set of eyes and newer perspective,” he says, noting that changes on the administrative level will result in more boots on the ground. “The sheriff’s office currently has good employees who are able to deliver quality services to the public if given the proper structure and guidance.”

He feels he’s the best person for the job because he’s proven his ability and continues to serve as a patrol officer with investigations, service calls and community policing.

“I do not believe I should be allowed to relieve myself of any fundamental obligations just because I am the agency head,” Henson said. He doesn’t believe his obligations should lessen the responsibility overall, with the expectation that the citizens of Limestone County will hold him accountable.

“In order to resolve the issues facing the sheriff’s office, one has to be willing to acknowledge the weaknesses and present a plan to correct those,” Henson said. “I have the plan, the ability and the willingness to make the Limestone County Sheriff’s Office a better agency.”