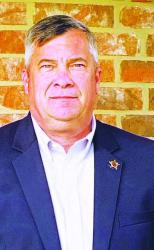 Agney has law enforcement experience in numerous roles and has served the Limestone County area for nearly 20 years.

“I started working in a large county jail and I worked as a deputy in a small county. You were required to do everything that a deputy could do. I have a thorough working knowledge of all the various aspects of law enforcement and I am able to understand the issues that both law enforcement and correctional officers encounter,” Agnew said.

He believes being approachable and treating all those encountered with respect is the proper way to approach the position of sheriff.

Agnew came to Limestone County in 1995 after being hired by then Sheriff Dennis Walker as a deputy.

While working with Sheriff Doyle Coslin, he was promoted to patrol supervisor.

In 1998, Agnew became an investigator with the Robertson County Sheriff’s Office after being offered a position by Sheriff Gerald Yezak, to serve on a narcotics task force. The task force served Limestone and Robertson Counties.

He returned to the Limestone County Sheriff’s Office not long after in 2001, this time earning the rank of captain under Sheriff Dennis Wilson. Through the years, Agnew has worked across a range of agencies, filing numerous cases in both federal and state courts in accordance with jurisdictions.

During that time, he has been a member of the U.S. Marshal’s Lone Star Violent Fugitive Task Force based in Waco. He was appointed to the Heart of Texas Child Fatality Review Team and still serves, in addition to holding the role of law enforcement liaison for the Limestone County Crime Stoppers.

In 2015, Agnew was promoted to chief deputy of the Limestone County Sheriff’s Office, the position he currently holds. He also obtained an Associate’s Degree in Criminal Justice from Navarro College. He earned his Master Peace Officer License in 2010, with more than 3,100 training hours in various aspects of law enforcement, and works together with all emergency services agencies.

before that under Sheriffs Dennis Walker and Doyle Coslin,” Agnew said. “I have seen a lot of things change; some subtle, some drastic. I have also been able to see what has worked best.”

He said that changes would be made to keep things moving at the Limestone County Sheriff’s Office in a positive direction.

“As chief deputy, I follow the directions, wishes, and policies given by the current sheriff,” he said. “After the March primary, I will have the opportunity to fully evaluate and consider changes that may be made.The voters must decide who they believe is best.”

According to Agnew, law enforcement faces the same issues across the state, regardless of size. One of the biggest is finding deputies, correction officers, and communication officers to employ and then retaining those employees.

“It doesn’t matter if you are a city or a county obtaining the funds to operate, your agency is

always a challenge,” Agnew said. “I understand only so much money exists to fund all of the aspects of government, so we need to work together to come up with solutions.

improve the outcome regardless of perceived limitations, while maintaining good relations with

all departments and other entities involved,” he concluded.